We went to Bergen at the weekend, driving across the mountain from Oslo.  It´s about 450 kilometers on the RV7, and crucially, crosses the Hardangervidda mountain plateau. The journey to Bergen took place in quite bad weather, but we had our winter tyres on!

As we came up to Haugastøl, the last hamlet before the mountain, it became clear that “kolonnekjøring” was in the offing: driving in convoy behind a snow plough, with a second plough bringing up the rear. This was a first for me, and quite good fun as long as everything goes well. Visibility was low and snow was collecting in drifts in the road; without the plough, it wouldn´t have been feasible. If things go wrong, I suppose anything can happen, since you would then be stuck in a car in the middle of a mountain with snow, wind and -10 C, and with only light clothing.

Everything went well, though, and we came down the steep Måbø-valley to spend the night at Mikkelparken in Kinsarvik. Very quiet place this early in the season, but we weren´t the only guests. 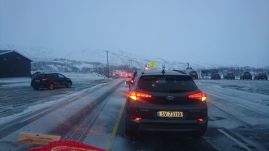 The next day we crossed the Hardangerbroen and in two hours arrived in Bergen.

I spent my first 14 years there, and while the city has changed, large parts of it are the same, just painted and redecorated. The general increase in wealth means that all the white wooden houses have had a thorough makeover. In addition to this, Bergen has removed the cars from the city centre, and drilled tunnels and created a light rail line. This makes the centre very pedestrian – and tourist – friendly.

The first few hours in Bergen are often very strange for me, since I go there seldom. Memories, dreams and reality mix, and I get this out-of-body experience. Then, as I acclimatize, reality takes over and I feel more grounded. But never quite. The dreamy feeling remains. I realize that when I dream of cities, it´s always Bergen.

The return journey took us across Hardangervidda at about 2230. It was still, -7C, with a half moon. Magical. 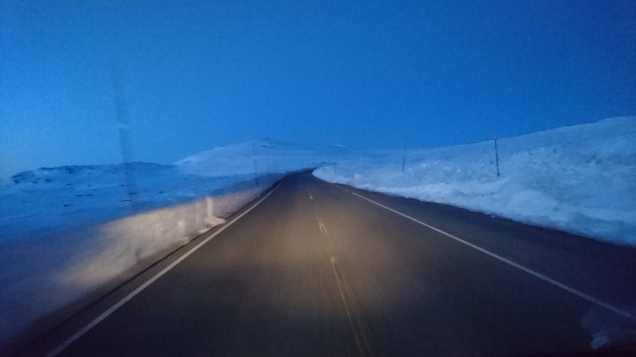 One thought on “Visit Bergen!”