So we went to Sicily, flying to Catania in early July to pick up our rented 9-seater and head down the Autostrada to Fontane Bianche, just south of Siracusa. It was hot the first two days, then settled around 30C, which is OK.

We weren´t the first tourists on the island. But a great many of the tourists were Italian.

But first – the food. “Marvellous” might be a good word to describe it, almost regardless of where you go. The high point was high in the hills at “Trattoria da Luciana” in San Piero Patti. Exciting road, but well worth it. Almost a religious experience for me – the food, I mean.

It turned out Siracusa was once an important city in the Greek empire. It is where Archimedes used to live, and there is a museum there in his honour. In one of the photos below you see the Ionic (or Doric, but certainly not Corinthian!) columns from about 500 BC incorporated into the Duomo of Siracusa. 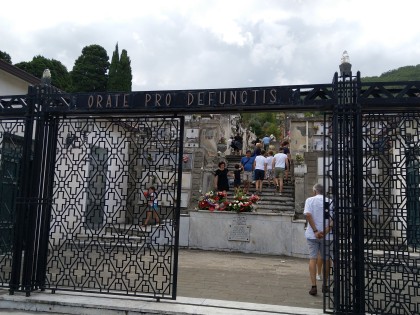 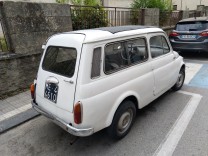 The white car above is a Fiat 500 Giardiniera, which you can watch here on Youtube.

We also went to Taormina. When you enter the place from the North side, which is what you should do, make sure you park in the large multi-storey just below the city (Lumbi); going further only ensures nail-biting and waiting in narrow alleys, before you head back to the multi-storey car park… 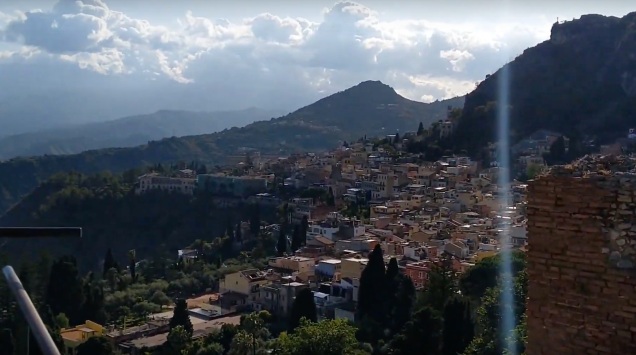 (view from the Greek amphitheatre; Etna is hiding there somewhere)

The thing with Taormina is it deserves a bit of your time, even if it´s rather packed with tourists. It´s possible to climb to the top of the hills and find an old castle or monastery, and there is an intriguing cable car going down to the sea. Is it there to take people up or down? We never found out.

If you are on the South-East coast, you should make the effort to see Ragusa, though, situated in what seems a remote valley, it has a quiet charm that is worth trying out. Less convinced about Mudica, and its famed chocolate….

Sicily reminded me of Crete. What´s new is ugly, what´s old is beautiful. In Crete, the old is really ancient, just dusty piles of rubble from Minoan times; or Venetian and lovely. In Sicily, the old is either Greek ruins; or Baroque and lovely.

The driving style is maddening in both places, but you get used to it. Just shake your head in disbelief and be prepared for anything, and you´re fine. Apart from Palermo, which is rumoured to be beyond belief – we didn´t go there, though.

What about the Mafia? You never see any traces of it, but nor do you see beggars. There could be a connection there – and you keep asking yourself if the shop you´re in is paying the “pizzo”(protection). Not a nice feeling.

We never really got to see Etna. Or the Eolian (windy) islands. So maybe we should go back one day?